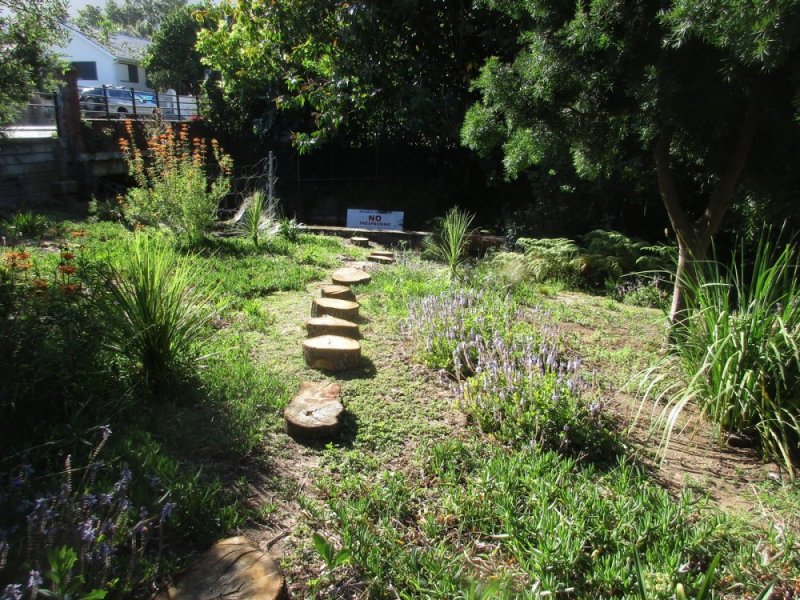 There were already some nice plants here including Wild Dagga, beds of Sour Fig, and ferns. However, at the same time there was a LOT of broken glass lying around. This used to be a dumping ground for the brewery and it shows. We did most of the work during November, and this included figuring out what a useful strategy was here.

During one of our first sessions two people who work nearby, Charmaine and Ishmael, came past and suggested we planted some new plants in one of the corners. With their help we have been cleaning the corner and we have planted various plants here. We tried moving some ferns but they didn’t take. Our new plants seem to be doing well.

At the same time we have been removing glass and litter, planting out Sour Fig and lilies, and we have worked on planting more vegetation along the steep river bank to avoid erosion. Furthermore, we have been given large wooden blocks by the Newlands Pool from a tree that was felled. These wooden blocks make for a great path! So one of our most recent activities is the construction of a footpath from the Liesbeek Trail to the river, using these wooden blocks. We’re almost there, and it is starting to look great!

For next year we plan to continue with general maintenance of the plot. We have been planting some species that serve mostly as pioneer species to re-establish the soil, so once they have taken we can look into planting some more locally indigenous species. At the same time we feel the plot is large enough to be made into a great seating area or something similar. We are not sure yet, but we will reach out to nearby residents, river trail users, and Friends of the Liesbeek to form a more detailed plan.