To empower people to green degraded spaces with locally indigenous vegetation and contribute to socio-ecological restoration.

Cape Town has the title of 'biodiversity hotspot' because it is blessed to be home to the Cape Florist Kingdom: a set of beautiful and unique plants and animals which occur within the Western Cape - and nowhere else in the world. The 1500 km² of Cape Town also includes 3.7 million people. Despite its local natural wealth, there are large areas in the city that are unnecessarily dominated by a stark environment featuring little to no vegetation and animal life - a hostile environment for humans and other organisms alike. The Cape Floristic Kingdom is remarkable because of the very high number of unique plants that occur only here. Unfortunately the proximity of the unique plants to harsh urban living has earned Cape Town the label of extinction capital of the world, with 1700 plants currently threatened with extinction.

A lot of the Cape Town´s original vegetation has been lost. The map below shows the various vegetation types that exist within the city boundaries (left hand side) as well as the transformed landscape (right hand side). 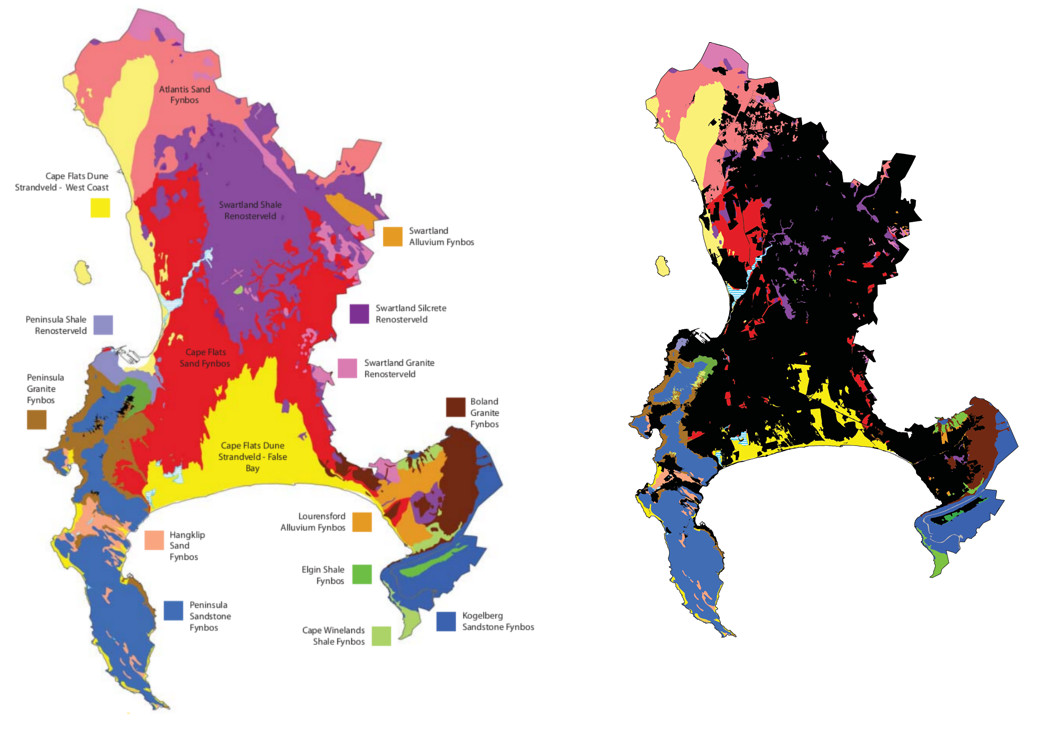 The important but threatened biodiversity of Cape Town is what has motivated us to initiate Communitree in this city. There is a lot to be gained from trying to protect the remaining patches of original vegetation but as can be seen from the maps we will also need to try and restore some of the indigenous vegetation and create links between remaining patches. This is exactly what we are trying to achieve! At Communitree we have a unique method to urban greening.

Our goal is to create functional fynbos corridors in urban environments, across Cape Town, connecting locally indigenous insects and animals to nature reserves, enabling them to feed and breed. These corridors also allow isolated plants to be pollinated by near-by insects, birds, or wind-blown pollen. Our energy is focussed on greening with locally indigenous plants and shrubs, along the Liesbeek and Black river, which act as biodiversity highways. Urbanisation is a significant threat to the unique biodiversity of the local fauna and flora, and Communitree aims to reconnect our urban spaces to surrounding protected reserves.

We believe in community-based urban greening and linking these local efforts with a strategic, long-term vision; creating urban corridors for biodiversity to thrive in urban areas, and ultimately restoring and expanding the original vegetation types found in Cape Town. Instead of protecting large areas (which is no longer a viable option), we aim to create small patches across the city, restoring ecosystem services in the city. Communitree primarily works in public space, by training and guiding local community members to restore indigenous vegetation in their own area.